ADAMCLISI MONUMENT
The Tropaeum Traiani is a monument in Roman Civitas Tropaensium (site of modern Adamclisi, Romania), built in 109 in then Moesia Inferior, to commemorate Roman Emperor Trajan's victory over the Dacians, in the winter of 101-102, in the Battle of Adamclisi. Before Trajan's construction, an altar existed there, on the walls of which were inscribed the names of the 3,000 legionaries and auxilia (servicemen) who had died "fighting for the Republic". (Latin: Tropaeum from Greek: Tropaion, source of English: "trophy").

Trajan's monument was inspired by the Augustus mausoleum, and was dedicated to the god Mars Ultor in AD 107/108 . On the monument there were 54 metopes depicting Roman legions fighting against enemies; most of these metopes are preserved in the museum nearby. The monument was supposed to be a warning to the tribes outside this newly conquered province.[1]

By the 20th century, the monument was reduced to a mound of stone and mortar, with a large number of the original bas-reliefs scattered around. The present edifice is a reconstruction dating from 1977. The nearby museum contains many archaeological objects, including parts of the original Roman monument. Of the original 54 metopes, 48 are in the museum and 1 is in Istanbul.

The inscription from the main monument can be translated in this way:
"To Mars, the avenger, Caesar the emperor,
son of divine Nerva, Nerva
Trajan, Augustus, who defeated the Germans,
the Dacians, great priest,
for the 13th time tribune of the plebeians,
proclaimed emperor by the army for the 6th time, elected consul for the 5th time, father of our homeland,
after defeating the Dacian and the Sarmatian armies." 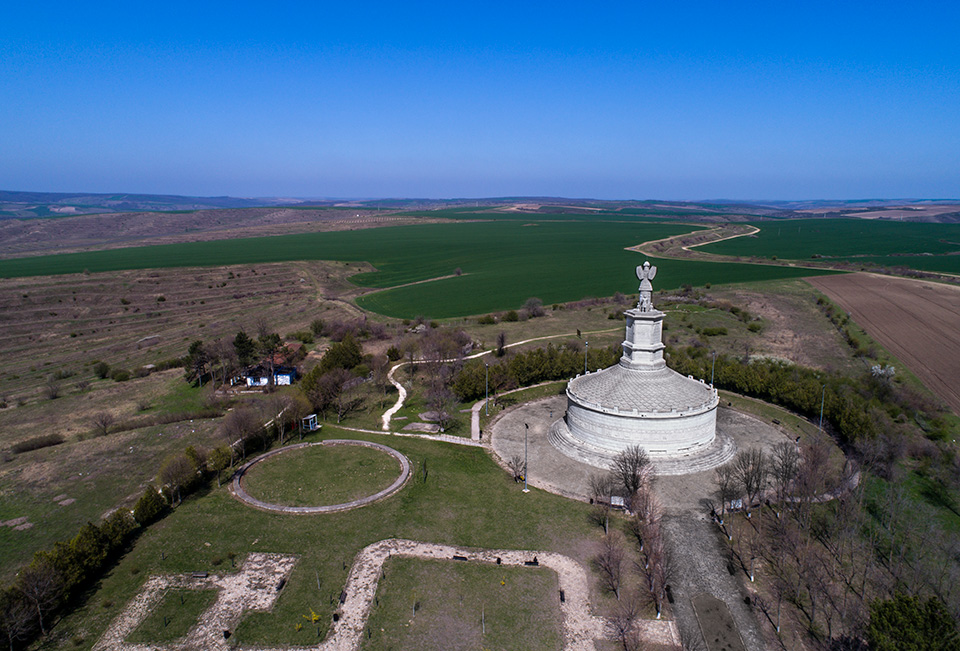 CAPIDAVA
Located on a rocky outcrop in outstandingly beautiful countryside, the ancient fort of Capidava overlooks a forested bend of the Danube, 25km north of Cernavoda. It is square in shape, with well- preserved walls and semicircular towers.
Capidava is Dacian for ‘citadel on the river’s curve’, its name thus remaining unchanged since pre-Roman times. The first Roman camp was set up in the 2nd century AD, although the present ground plan dates to the 4th century AD. Elevated and once surrounded on 3 sides by water, the fort was naturally defensible, one in a line of defences along the Danube on the limit of the Roman Empire. In the 6th century, invasions and an earthquake all but destroyed the fort; a new inner bastion was created for the garrison, and the civilian population moved inside the walls. The fort remained a border post until the 11th century.
Although its outer walls have been fully revealed, along with the inner bastion — a late Roman feature unique in Romania — much remains to be found on the site, and the summer visitor is likely to find ongoing excavations. The Capidava fortress lies at half the distance between Harșova and Cernavoda. It has been erected during the Trajan ruling at the beginning of the 2nd century a.D. like many other Roman camps and fortresses from the Danube frontier.
This camp is situated on the right Danube shore near a river ford and has been constructed by the following detachments and legions: the V Macedonica and the IX Claudia legion. The Getan toponym (Capidava means 'the fortress from the turning place') confirms a pre-Roman human existence that is also archeologically proved in a settlement of such importance to communication between the Dobruja Getans and the Muntenia Getans. The geographical position of Capidava was very important from a strategical point of view and has determined the settling of a military station as well as the construction of a civilian center nearby during the Roman epoch. The spot chosen for the fortification was the most appropriate : a rocky, peninsular massif surrounded from three sides by the Danube and a natural ditch. The shape of the massif has imposed the shape of the camp: a quadrilateral with its long sides running from the north-west towards the south-east. The eastern part, a narrow promontory gave accesses to the massif and to the fortress. As a military station for almost five centuries the fortress allowed cantonment of a series of troops: cohort I Ubiorum, cohort I Germanorum (2"d - 3rd century); vexillatio capidavensium, cuneus equitum Solensium and cuneus equitum Scutariorum (4,n - 6'“ century). Like the other frontier settlements, Capidava had to confront many barbarian attacks. It so happened that the camp has been destroyed by carpo-Gothic attacks and had to be entirely reconstructed towards the end of the 3"' century a.D. The reconstructed fortress (its ruins can be visited nowadays) has a quadrilateral basis (105 x 127 m) with 2m thick and 5-6 m high walls. There are also 7 towers, 11 m in height; a 2,36 m broad gate on the south-east; a strategic gate on the Danube side of the tower and a terrace harbor. The camp has been attacked, destroyed and then rebuilt several times. During the 6"’ century A. D. after the Huns had burned it down, when probably no sufficient forces existed for a complete reconstruction, a little quadrilateral fort has been erected (60 x 60 m) on the southern part of the former fortress. Archeological diggings have discovered the itinerary of the site wall and also the defense ditch. In the 7"’century A.D. the fortress has been completely destroyed by the Slavic-Avarian attacks and it was deserted by all troops left to survey the area. Due to the reorganization of the Byzantine Empire, Capidava gets again to the attention of the administration. On top of the fortified Roman ruins, a new peasant fortress has been erected, a fortress for the stratiotoi (peasant frontier guards) that will last up to the 11"' century and consists of eleven living platforms, as the successive reconstruction shows. The new fortress was surrounded by a wall of stone and soil, doubled by a defense ditch, both following the itinerary of the Roman-Byzantine site. The visiting route goes around the fortress along the site wall from west to east; ruins from a Roman-Byzantine construction can be seen inside the fortress on the right side: store houses, living houses, a hypocaust etc. The fort lies on the left side of the fortress and its adjacent buildings. Towards the North there are some feudal mud-huts where those stratiotoi have lived. Behind the site wall a Christian basilica can be seen dating from the 5“' - 6'b century A.D. The thermae can be visited on the plateau in front of the fortress entrance. The highly diversified pieces found in the fortress and its surroundings are exhibited in the Museum of National History and Archeology in Constanta.

HISTRIA
Histria or Istros (Ancient Greek: Ἰστρίη, Thracian river god, Danube), was a Greek colony or polis (πόλις, city) near the mouths of the Danube (known as Ister in Ancient Greek), on the western coast of the Black Sea. Histria is derived from the Latin word "Hister", meaning "Danube", the river the city was located near, and "-ia", a suffix added to a word to signify that it was a location or place, as in Gallia or Iberia. Altogether Histria means "On the Danube", "Located near (or by) - The Danube". It was the first urban settlement on Romanian territory when founded by Milesian settlers in the 7th century BC. It was under Roman rule from the 1st to 3rd centuries AD. Invasions during the 7th century AD rendered it indefensible, and the city was abandoned.
Established by Milesian settlers in order to facilitate trade with the native Getae, it is considered the oldest urban settlement on Romanian territory. Scymnus of Chios (ca 110 BC), dated its founding to 630 BC, while Eusebius of Caesarea set it during the time of the 33rd Olympic Games (657 – 656 BC). The earliest documented currency on Romanian territory was an 8-gram silver drachma, issued by the city around 480 BC.
Archaeological evidence seems to confirm that all trade with the interior followed the foundation of Histria. Traders reached the interior via Histria and the Danube valley, demonstrated by finds of Attic black-figure pottery, coins, ornamental objects, an Ionian lebes and many fragments of amphoras. Amphoras have been found in great quantity at Histria, some imported but some local. Local pottery was produced following establishment of the colony and certainly before the mid-6th century. During the archaic and classical periods, when Histria flourished, it was situated near fertile arable land. It served as a port of trade soon after its establishment, with fishing and agriculture as additional sources of income. By 100 AD, however, fishing had become the main source of Istrian revenue. Around 30 AD, Histria came under Roman domination. During the Roman period from the 1st to 3rd centuries AD, temples were built for the Roman gods, besides a public bath and houses for the wealthy. Altogether, it was in continuous existence for some 14 centuries, starting with the Greek period up to the Roman-Byzantine period. The Halmyris bay where was the city founded was closed by sand deposits and access to the Black Sea gradually was cut. Trade continued until the 6th century AD. The invasion of the Avars and the Slavs in the 7th century AD almost entirely destroyed the fortress, and the Istrians dispersed; the name and the city disappeared.
Geographic setting
Ancient Histria was situated on a peninsula, about 5 kilometres (3 mi) east of the modern Romanian commune of Istria, on the Dobruja coast. The ancient seashore has since been transformed into the western shore of Sinoe Lake, as the Danube's silt deposits formed a shoal which closed off the ancient coastline. The current Sinoe Lake was at the time the open northern bay, while another bay on the southern shore served as the port. The acropolis with sanctuaries was established on the highest point of the coastal plain. The settlement itself, erected in the 6th century, was 1/2 mile (800 meters) to the west of the acropolis. The settlement had stone paved streets and was protected by strong wall. Water was collected along 12.5 mile (20 km) long aqueducts.
The ruins of the settlement were first identified in 1868 by French archaeologist Ernest Desjardins. Archaeological excavations were started by Vasile Pârvan in 1914, and continued after his death in 1927 by teams of archaeologists led successively by Scarlat and Marcelle Lambrino (1928–1943), Emil Condurachi (1949–1970), Dionisie Pippidi, Petre Alexandrescu and Alexandru Suceveanu. The Histria Museum, founded in 1982, exhibits some of these finds.

>>Legends of the Black Sea