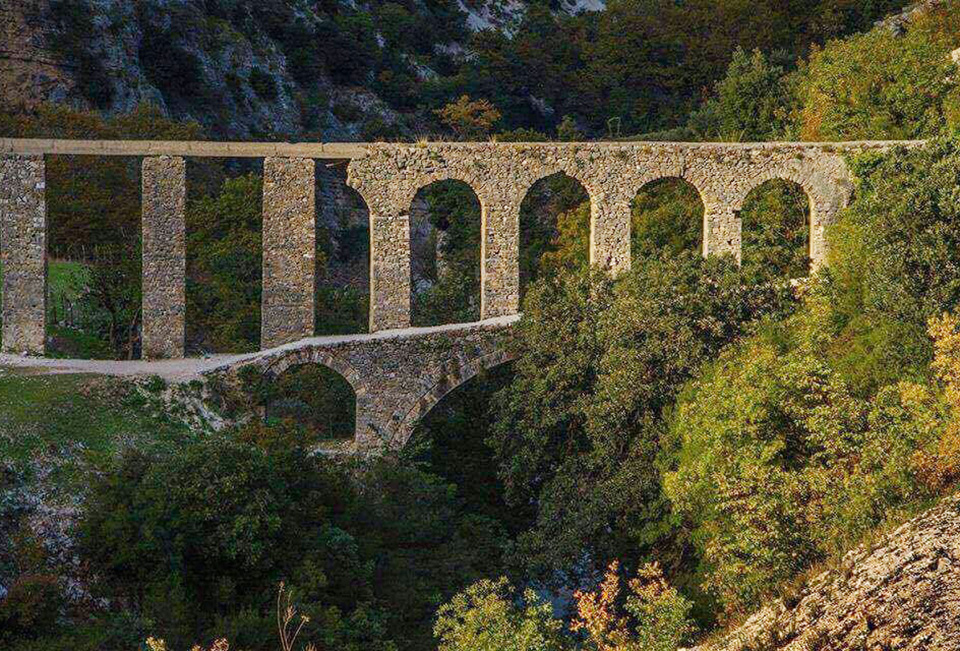 The region of Labëria, in the southern part of Albania, is distinguishable for cultural traditions. It has been crossed by different populations from ancient times: Illyrians, Romans, Greeks, Normans. During the Ottoman invasions the inhabitants of the region used to live mainly in the mountains. In this land of cultural crossroads, there are still minorities like Aromanian and Roma, while at the border with the Greek region of Epirus, there is a presence of Greek communities.
Nivica is a small village in Labëria, situated in Butrint National Park, 23 km from the coastline, hidden in the mountains above some spectacular canyons, strung out along a sheer cliff behind an old, crumbled fortress. The life is still based on agriculture and animal rearing. It is known for extraordinary naturalistic places, as canyons gorge slicing and an important zone with majestic oaks that are still considered sacred, according to very ancient rituals (the ritual of ancient oaks was one of the most relevant in ancient times, spread all over Europe. It was well-known also in the famous sanctuary of Dodoni, in the Greek Epirus). The area is relevant for historical reasons, as it has a IV century bC. settlement, with visible remains, but not yet excavated, and with the temple where the local people still go to pray at the "sacred oaks". There are also Ottoman-era houses and small stone-bridges still arched over gullies, untouched for centuries.
This is a place where Roman troops traveled (there was the famous battle of Flaminius against the Macedonians), where Normans traveled, where Ottomans traveled, and where World War I and World War II were struggled. There are many stories and legends connected to this area. And many travelers passed from there: Lord Byron, Henry Holland, William Martin Leaks, James George Frazer, Isadora Duncan -just to mention few- all witnessing the richness and charm of the cultural-historical heritage.
Time appears to have stood still for decades, in a wonderful landscape, with quite untouched life-style. People still milking their sheep and goats, collecting wild herbs, keeping traditional skills alive, an heritage that risks to disappear.
The area is also important for its extraordinary immaterial heritage, with traditional music, musical instruments (like the flutes), songs, especially the iso-polyphony, included in UNESCO’s intangible cultural heritage list since 2008.The iso-polyphony is part of folk Albania tradition and accompanies weddings, funerals, fests and is strictly connected with life of small mountain villages, such as Nivica. It is characterized by three parts of songs with a drone sound made by human voice, mainly masculine, and assumes different aspects in each region of Albania. The most important division is between the iso-poliphony of the Labs and of the Tosks. The Labs population, in Labëria, are known for Pleqërishte genre, having particular moments of multipart singing and a fourth voice made only by women.